At nearly 200 individuals as of August 2015, the Ngogo chimpanzee community is by far the largest yet described in the wild. 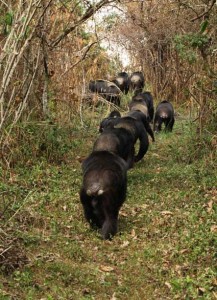 Group of males heading out on patrol.

Much research at Ngogo has focused on explaining the ecological reasons for this unusual demographic situation and its influence on chimpanzee behavior. Past and ongoing topics of study include intra- and inter-sexual social relationships and cooperation, kinship and social relationships, mating behavior and reproductive success, hunting and meat sharing, territorial behavior, and feeding ecology. In addition to following the chimpanzees and recording their behavior, researchers at Ngogo also non-invasively collect urine, feces, and other biological materials for endocrinological and genetic analyses, as well as conduct phenological and botanical studies of the forest ecology. 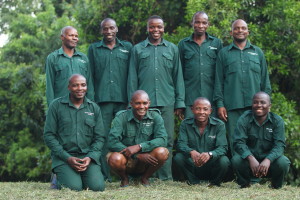 Long-term research on the Ngogo chimpanzees was initiated by David Watts (Yale University) in 1993 and John Mitani (University of Michigan) in 1995. Kevin Langergraber (Arizona State University) joined the Ngogo Chimpanzee Project as a graduate student in 2001 and as a co-director in 2011.

If you access Amazon through any of the links below, Amazon will donate 4-6% of the purchase price to the NCP.

NOTE: if these links do not appear, try disabling your Adblocker and check again.